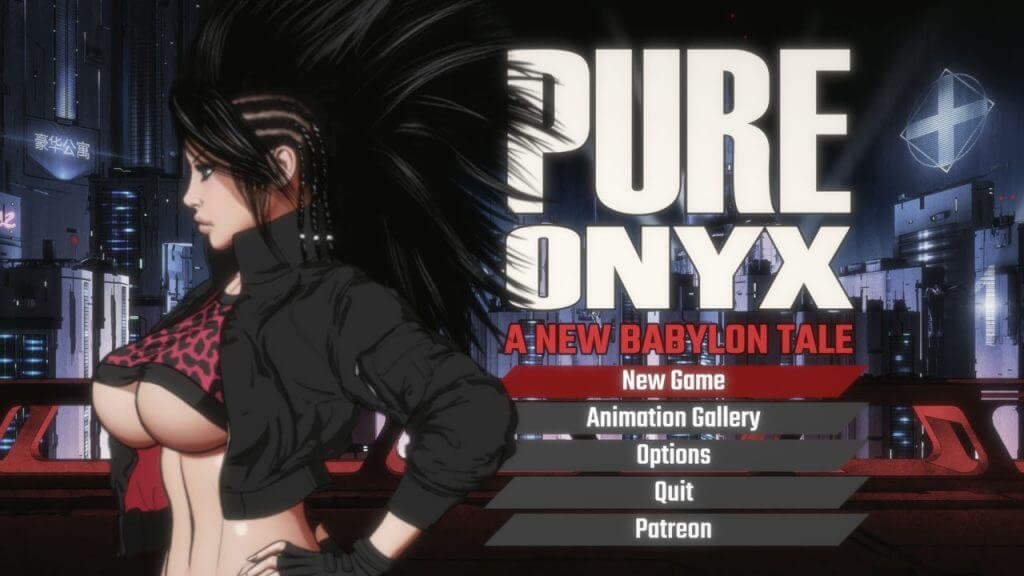 Currently in development, made by Eromancer, the project has made a quick rise to popularity in its effort to seek supporters on Patreon. With over 3,000 supporters and more than 15,000€/month, there is a good reason as to why people find a great interest in supporting the project…

To learn what the game is about, here is how the developer describes his own game:

“Pure Onyx is a classic beat ‘em up with RPG elements set in the world of our flagship title, Malise and the Machine. It follows heroine Onyx as she brawls her way through the dystopian streets of New Babylon, where she’ll encounter gangs, crime syndicates, a corrupt police force, and the bio-engineered horrors of the insidious Babel Corporation. It features fully animated, 3D art and is styled after 80s cyberpunk anime. Pure Onyx contains in-game, fully animated H content.”

In the current build, utilizing RPG elements, Pure Onyx lets the player fight waves of enemies in different locations while earning experience points and better gear to grow stronger. Enemies drop items for the player to pick up and there is a shop and inventory system in place to add an extra level of depth to the combat.

Though the combat is visually pleasing, the complexity of it in the current state of the game is very simple that requires further development to be made but works great as a demonstration of what is yet to come.

There are several enemy variations to fight against; Thugs, FemCops, and insects, as well as two bosses (Charger and Street Lord Wraxe). All of the enemies have their own unique fighting style and H animations, with FemCops rising as the most notable ones capable of doing stylish acrobatics as a way of approaching the player to attack. More enemy types are in development, including bosses.

As the main hook of the game, enemies have the ability to grab Onyx and make her submit to their sexual desires in the middle of the combat. Some of these animations can be downright jaw-droppingly gorgeous with great attention to detail. The developers have gone up and beyond in delivering a unique adult experience that should not be missed!

In addition to playing as Onyx, currently, the game provides access to view two other characters in the H-gallery: FemCop and Blade Bunny. Even though these characters cannot be played as of right now, the developer has confirmed that there is a chance for more playable characters to be introduced later on.

The combat, though not very complex in its current state in development, is able to provide a taste of what to expect from the final product.

The player is able to attack using one button combos, dash, jump, guard, and stomp enemies on the ground. Enemies on other hand can provide a bit more complexity by attack patterns that are not too easy to read and dodge or guard against.

Certain attacks must be avoided by moving out of the way or canceling the animation by a quick counterattack. Bosses often use attack patterns that cannot be blocked but so do normal enemies when using a sexual grab that will put the player in a struggle state.

Every once in a while the player will encounter a boss after a certain number of waves of enemies. These boss fights are quite a spectacle, providing visually pleasing performance and unique attack patterns that can be fun to fight against.

However, it must be noted that in the current state of the game, they can be very easy to beat due to a stun-lock that happens when the boss is hit in rapid succession with quick attacks that is quite easy to pull off, thus making the bosses nothing more than standing training dummies to defeat as quickly as they are introduced – something that will be fixed eventually, I can imagine.

Pure Onyx has several stages planned for the primary release that will include the following locations: Slums, Junkyard, Sewers, Red-Light, Labs, and Skyline. These stages are said to be large in scale, more than what the demo currently provides with the infinite wave system.

In the current demo, you can play a small portion of the Sewer and Skyline level that demonstrates the direction of the environment chosen for these stages.

Able to capture the attention of anyone who enjoys a good adult game regardless of genre, Pure Onyx provides a unique mature experience filled with imaginative lewd scenes and outstanding animation quality!

The adult content is built seamlessly into the gameplay that provides fine opportunities to take a breather and enjoy Onyx having fun with the enemies in midst of fighting. In addition to this, the player is able to collect H scenes to a gallery accessed from the main menu by playing the campaign and defeating new enemy types.

The H animations during combat can be enjoyed without the game punishing the player for time spent in the animation. The animations are often deliciously lengthy but can be skipped at any time if so desired, so the flow of the combat remains mostly steady and unbroken at all times.

A neat feature about Pure Onyx is that sometimes enemies will partner up to have sex with Onyx together if certain requirements are met. A new unique H animation is thus born that is exciting to discover and a testament to the developers’ dedication to providing a high-quality experience beyond players’ expectations.

The type of sex that Onyx will experience against varying enemies is hardcore that fits well in the game’s rough-natured theme of streetfighting against crime syndicates, corrupt authorities, and mutated monsters – A game for a true hardcore audience seeking a kind of sexual thrill hard to find anywhere else!

I had the chance to contact Eromancer and ask him questions about the project in order to provide more information that may be of great interest to you. Here are the questions and the answers I received:

1. Does the game have a planned release date?

“Nope, when it’s ready! However, our next major goal is a public demo that will be more indicative of actual gameplay. Most of what is available in the test release is an infinite wave event simply for combat and systems testing.”

2. Are players going to be able to play as other characters besides the current one (Onyx)?

“We’ve designed the game to allow for extra playable characters, but can’t confirm yet whether this will happen or if additional characters will be available with the initial release.”

3. Will the game have a story and will there be voice acting?

“The game will have background story, but we aren’t sure to the extent that it will be fleshed out in the initial release. We’re considering adding a story mode later. Voice acting is planned for at least H scenes.”

4. How many boss fights are planned for the final product?

“We’re looking at 6 large stages for the primary release, with approximately 2 major bosses per stage. These stages are the Slums, Junkyard, Sewers, Red-Light, Labs, and Skyline. The paths through the stages will differ depending on events and conditions.”

5. How big is the development team working on the project?

“It fluctuates, but currently we have 6 full time developers and 8 part time!”

6. How far will the adult content go in the game? What can we expect to see in the future? We can already see insects as enemies in the demo, will these take part in adult scenes in the future?

“Can’t comment on some aspects of this one, but I can say that our rigs are compatible for belly inflation, breast expansion, and nipple penetration scenes ^-^. Also, expect tentacles.”

7. On what online stores will the game be sold once ready?

“It will definitely be available on one or more retail sites. We aren’t certain where yet, so don’t want to provide inaccurate speculation here :D.”

Wonderful! I want to thank Eromancer for taking the time to answer these questions. Pure Onyx is a title that is definitely on my radar to cover more about in the future as well as the development progresses.

If you have any questions you would like to ask from the developer, you can leave your question in the comment section and I will hold on to it for possible future Q&A sessions.

To play the latest version of Pure Onyx, you must first support Eromancer on Patreon to gain access to the Pure Onyx Download. There are several tiers to choose from, each with its own benefits to consider, but even the lowest tier named “Latest Game Version + Artwork” will grant access to the demo.

Once you have downloaded the demo using the link provided above, all there is left to do is to extract the zip file and start playing!