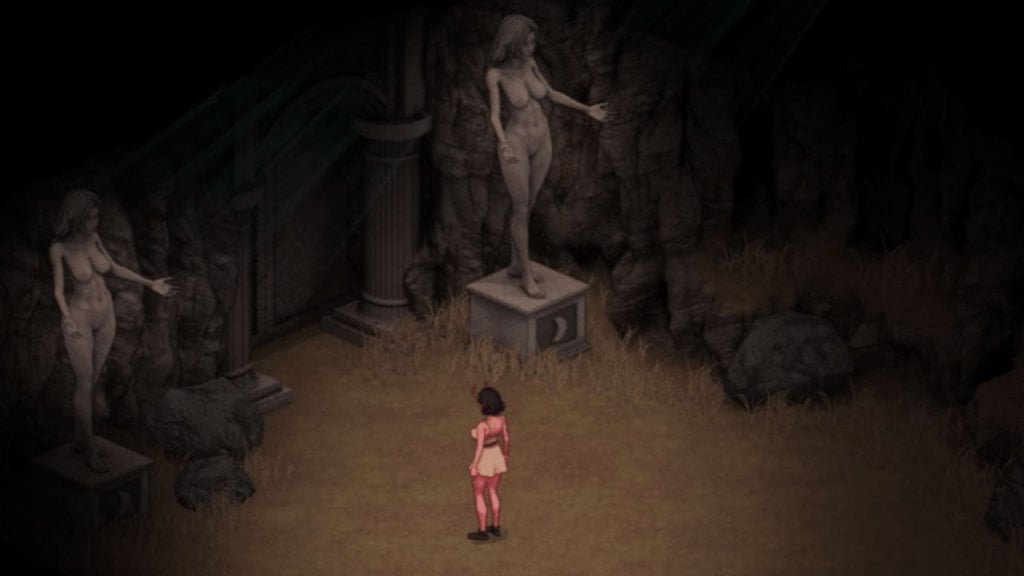 It is not often that I get deeply invested in stories found in adult games simply because good stories come rare, but a story worth getting invested in is exactly what Hellscape did to me

From the very first minutes into the game, Hellscape reveals its beautiful art style guided by mesmerizing music and an interesting story that only grows more and more addicting to follow the further you play!

Set in a medieval fantasy world, you play Izobel, a naked sexy demi-human succubus who is an open-minded and kindhearted little creature, different from her kind but still shunned by humans.

It seems that almost no one wants anything to do with Izobel which feels unfair when seeing just how nice she can be to others. At times it can feel somewhat heartbreaking to see how people treat her badly, being blinded by ignorance. The game succeeds to convey all this beautifully thanks to its great writing.

There is plenty going on in Hellscape, not just the sympathetic story of Izobel.

As an RPG, Hellscape introduces other characters that will join your party along the way, Karin being the first companion for Izobel to meet on the road.

Karin is a novice healer from the Aelic church, another kindhearted person who sees good in others. She appears as one of the very few humans able to accept Izobel as someone other than a monster.

Enemies wander around in the world and when bumping into them, a battle takes place. While you can run past many of the enemies, this would mean passing on exp that helps make your party grow stronger.

When battling enemies, Izobel has a couple of tricks up her sleeve to defend herself. She can either attack or seduce her enemies.

Magical abilities require MP and they can be used from a safe distance, some even have environmental benefits to them like making a bush catch fire and thus strengthen the attack.

Physical attacks require no mana but they put Izobel in the way of danger for being too close to the enemy. They work as a last resort when everything else fails.

Hellscape’s combat offers more than meets the eye. When combined with a great story to follow and a beautiful world to appreciate, it does not take much for me to recommend the game for you. However, if you wish to learn more about Hellscape’s combat, allow me to explain the seduction system…

Seduction charms your enemies and makes them your allies but possessing them drains your MP each turn. The more you have seduced allies on your side, the more MP you end up losing.

When your MP runs out, you lose control of your allies and they return to be your enemy once again. Seducing is not always the answer to every battle as some enemies require more heart points to be seduced than what you might have.

Seduced enemies can act as a meat shield for you while dealing damage, thus allowing Izobel to be relocated to safety with each turn, or at a distance where she can attack safely.

There are various ways to play seduced enemies to your advantage, it is all up to your own strategy how you wish to use them to win your battles.

The seduction system is great, though nothing new you probably have not seen before. Not that Hellscape has to reinvent the wheel, after all, this system works just fine the way it is.

While there is obviously room for improvement in many places, Hellscape is already on the right track to becoming a great adult game to look forward to.

If you enjoy turn-based combat and visual-novel-styled storytelling, I can not recommend Hellscape enough for you, go out there and try it out, you will not be disappointed!

I would recommend you to check out Bakezori Game’s Patreon to support the project but right now as I am writing this, their Patreon page does not seem to be working correctly, and perhaps there is some reason to worry…

It appears that there has not been any word from the developer for almost a year now. Despite having contacted the developer to ask about the development, I have not received any answer.

Indie game developers going radio silent for a year or two is not always a death sentence for a project, though it is natural to worry. Sometimes it is good to remind oneself that these developers are ordinary people who live ordinary lives while working on projects that they do not always find time to finish because life is full of surprises.

Not everyone handles their time of silence professionally and let their audience know about it, I am an unfortunate great example of this. Having said all this, I would not bet my money on never seeing Hellscape make a return if it has indeed halted development, there is always hope.