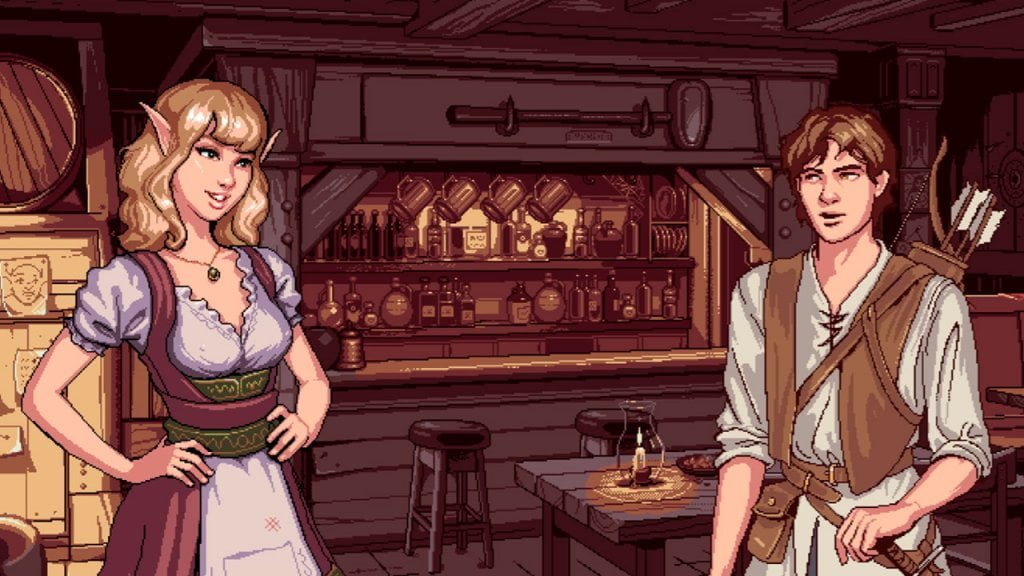 Aurelia is an upcoming Point-and-Click Adult RPG Adventure developed by MirthalGames, with a planned release date yet to be announced on Steam. The game is being published by Critical Bliss.

“In Aurelia, you will step into the shoes of a young adventurer who returns to his childhood village to reclaim a house inherited from his grandfather. On a sudden twist of fate, you find a mystical amulet in your newly acquired house, and its simple touch puts in motion a chain of events that will lead you to meet a mysterious woman who has sought refuge in your home.”

The game offers retro-styled pixel art for both the adult scenes and gameplay. Seeing how authentically Aurelia mimics game design of a bygone era, this is clearly a love letter to the fans of old school retro games, but also a good reason for the new generation of young adults to dip their toes into retro and appreciate what is now considered old but gold.

Explore a world full of wonder, with plenty of exotic races, exciting characters, and mystical encounters. There are many stories to unfold, over 8 unique characters, with their traits, personality, and backgrounds.

The RPG mechanics in Aurelia allow you to level up your character, improve stats, equip artifacts, drink potions, and slay monsters. There is also lots of things to do like fishing, play blackjack, craft potions, take care of your magical garden, explore a dungeon, visit a bar, and chop wood.

For those who enjoy completing games 100%, there are over 80 achievements that reward the player with not only pride and accomplishment but also extra scenes.

Besides the amazing-looking pixel art, Aurelia’s combat caught my interest but also left me puzzled of what exactly it will offer as there is no real explanation of how the combat will play out.

I am currently in the middle of completing the demo as I am writing this and I am yet to see if the demo will feature any combat in it. Thus far I have only been spending time at the village, lake, and my own cottage with various NPCs to talk to, but there has not been any sign of combat yet…

We can see scenes of a floating horned blue demon with the main character shooting arrows at it, and another one with a vicious-looking man-eating plant that holds a completely different styled combat UI from the horned blue demon scene…

This may be quite confusing to someone who has not played the game yet, but simply know that Aurelia features different little minigames that can take the player by surprise. For instance, I sure as hell did not expect to be serving alcohol to a bunch of town folks in a fast-paced point-and-drag minigame which grew on me the further I got in it. These minigames can be pretty hilarious!

Despite not having much clue on how the combat works in practice, it does not prevent me from getting excited about the game. The demo has been a wonderful experience thus far even without combat and exactly what I was looking for in an old school game like Aurelia.

There are many hidden items to discover and puzzles to solve which has kept me quite busy. Since the demo is a bit longer than I expected, I will still need some time to see it through.

Everything will become clear eventually and once I know more about Aurelia, I will return to introduce the game to you more thoroughly.

For those seeking to play the game now rather than later, you can download the demo from Mirthal’s Patreon. While I highly recommend it, you do not have to be a backer to gain access to the public test-build, it is completely free.

I have played more pixel-styled adult games than I can possibly count from memory, and even when there are some remarkable games to mention from this category, I think Aurelia’s pixel-crafted adult scenes take the cake. There is just so much detail squeezed in the scenes which make me go all wow out loud.

Thus far I have only seen humans and elves, and while these images are very pretty, it is the monsters I am more interested in, so hopefully I can see something more “exotic” soon enough. However, for anyone else looking for that vanilla flavor in their adult games, Aurelia does not disappoint!

I should remind myself that I have only scratched the surface of what Aurelia has to offer, and this is not me drawing a verdict on the game’s adult content, just mere first impressions.

If you are looking to support Mirthal on their quest to develop Aurelia, you can start your journey from their Patreon. You can gain access to their Discord, and weekly previews for all the scenes, portraits, backgrounds, and minigames. You can even vote on their polls to decide what will be included in future game patches. There are other benefits as well so check them out!

Mirthal has raised over 7,000€ per month in donations with over 1,600 patrons backing the project. This is quite an outstanding achievement from the developers and a clear sign that there is a high demand for the product they are developing.

In case you missed it before, I remind you again that you can download the Aurelia demo from Mirthal’s Patreon and start enjoying the game right now. Again, while recommended, you do not have to be a patron to have access to the demo, it is free.

I will follow Aurelia’s development with great interest and deliver news of its progress whenever there is anything major worth reporting on.