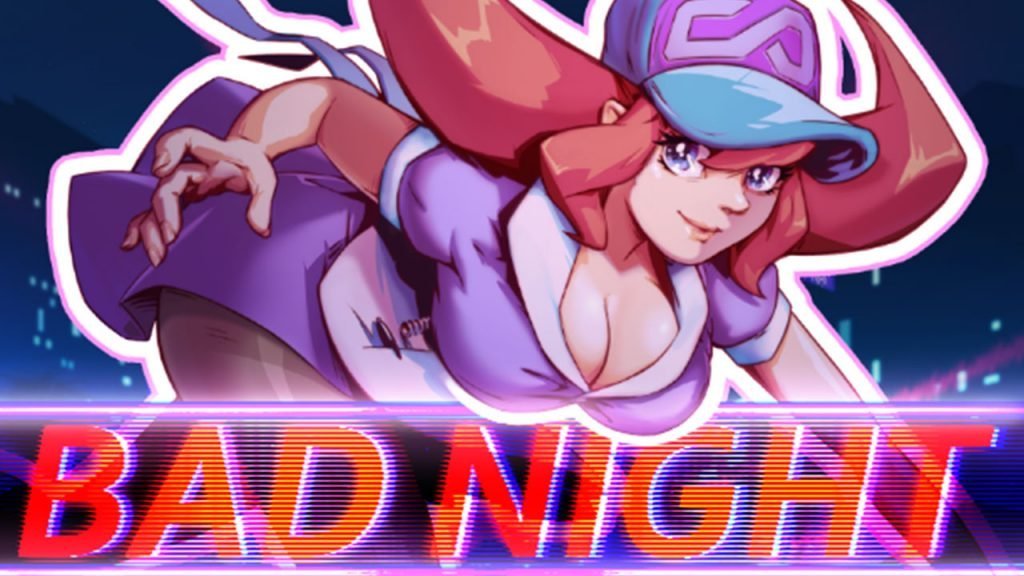 The game is currently in development made by Uknowcorn, and it is said to be released somewhere in mid-2021. Having talked with the developer via Twitter, this is what I have learned about the project…

You play as Erika, an alien with a proclivity for sex who crash land on Earth and is now being chased by government agents and other entities seeking to have a piece of this stranger from another planet.

A small story told through animated cutscenes, you get to follow both Erika and the agents who are after her. The game introduces new characters from which you will find those who will seek to harm you and those who will aid you on your quest to save humanity – Also known as Quest NPCs.

Bad Night is marketed as an action platformer but another way to describe it would be an action-runner with rhythm elements mixed in.

The goal is to keep Erika moving forward and defeating bad guys standing in her way by using alien superpowers. Erika can dodge roll to avoid projectiles or jump over them. Some environmental objects can also be interacted with to get past enemies.

For a casual gamer, Bad Night is said to take around 6-8 hours to beat. For those who are willing to explore every nook and corner of the game and all that it has to offer, Bad Night may take up to 15 hours. For a Speedrunner, 15-30 minutes.

Erika can charm enemies to have sex with her that refills the stamina meter. You need the Stamina to execute superpower abilities like double jump, power slide, or reduce damage from impacts, but also to stay alive.

If you have no stamina left and cannot regenerate, Erika will fall on her back on the ground, sending the player to the last checkpoint.

Find the best position to get the most stamina out of your victim. By gaining bonus stamina from sex, Erika will gain temporal unlimited stamina boost, super speed, and physical immunity.

With three hearts as your life bar, Erika will lose a heart and a layer of clothing when she gets hit by enemy gunfire or another physical attack. Enemies also have their own health bar displayed.

The game will feature several epic boss battles. Boss fights are semi-puzzle sections where you have to figure out the way to overcome them amidst the chaos. Through simple observation and using the abilities taught to you at previous levels you will find a way to defeat the bosses. There are not only bosses but also minibosses.

Bosses are introduced throughout the story and will have their own special sections of gameplay that mix things up a bit. For example, the first boss will harass you with a searchlight on a helicopter at night which spawns agents around Erika when she gets caught by the searchlight. Avoid the searchlight long enough and you will get to fight the boss personally.

Face the Eastside gang leader Pipe and his sexy girlfriend Brenda. Compete against Brenda to stay on top of a lowrider as it bounces its way through downtown.

Finally, fight a giant female robot S.T.A.C.Y with destructible body parts. These are just a few examples of the bosses that you will be facing.

There are several levels for you to run through (At least 16 confirmed) and the enemies you will be seeing in them vary greatly from humans to mutated abominations created from using Erika’s alien DNA. These enemies are themed after the bosses that come after them…

With Pipe and Brenda, you will be seeing a lot of gang type enemies, while with Agent 9 Greta, Erika will be surrounded by government officials, etc.

It has not been confirmed yet how many sex scenes the game will offer for the player but what we do know is that not every enemy will share a spotlight in having fun with Erika, unfortunately.

Erika will be able to wear more than just a waitress outfit. There are multiple different skins for the player to collect and enjoy, some of which are more revealing than the others…

Uknowcorn is planning on offering Bad Night on Steam. There will be an Indiegogo campaign or other sort of fundraising program to accompany the Bad Night Steam-product-page launch at which point you can show your support to the developer if you so wish. Once this happens, you can be sure to learn the news either here on the site or on the developer’s Twitter.

Bad Night is currently being worked on by a small Indie team of only two people. The project got started in late 2019 and has now been in development for over a year. The developer is aiming to finish the game somewhere in the middle of this year 2021, but do note that this is nothing but a mere estimate and not a promise.