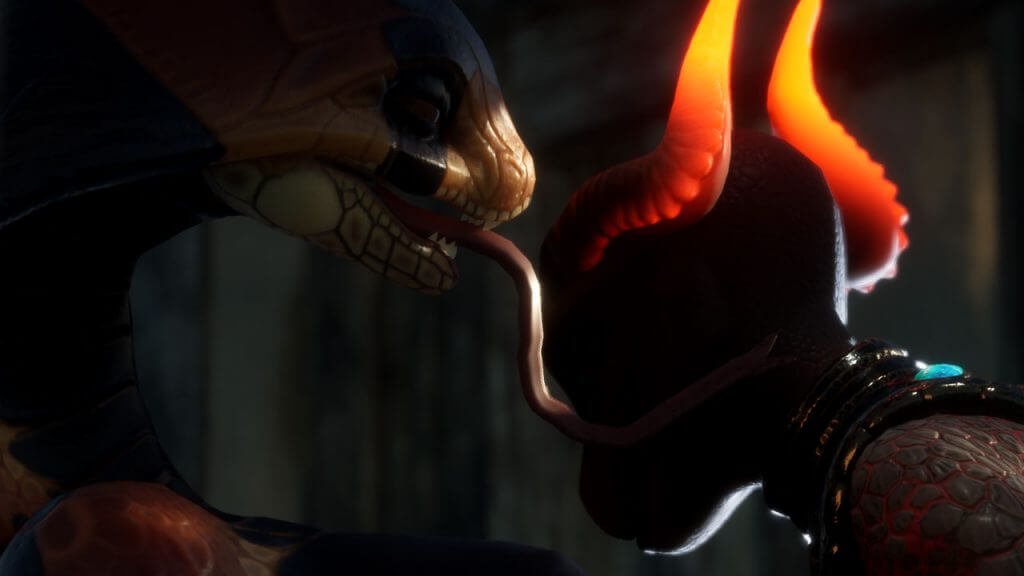 For those keeping their eyes on Carnal Instinct and its development, this major content update can already be old news, but to everyone else, there is much to discuss what is new in the game and what is yet to come, specifically for the Steam version.

If you are yet not familiar with the game, you can learn more about Carnal Instinct by watching its trailer or Gameplay Demonstration. Carnal Instinct is an open world action RPG that puts heavy emphasis on exploration and humanoid furry creatures having sex with each other.

A new addition to Carnal Instinct’s family of furry creatures is the snake race called Naga. You can now find a few of them in the world, providing sexual services for some coin. Nagas come with several skins for you to admire; Dune, Mountain, and Coral cobra skins.

The first Naga can be spotted at the starting location when first stepping into the world of Sabu, pretty much standing right in front of you. The second one stands caged at the location where an NPC named Djeda is willing to let you have sex with a Centaur for some coin. Watch out though, depending on your choice of words when speaking to the Dune Snake, she might give you more than you bargained for…

As of right now, there are a couple of things you can do with the snakes, and as the development progresses further, there will be new sex animations added, naturally. Currently, you can have a Naga suck your cock, or have vaginal intercourse, demonstrated in this short video I have captured for your viewing pleasure.

In addition to Naga sex scenes, you can now enjoy four new adult scenes! Remember the three Concubine sisters near the great temple of Anubis? Now there are two more options for you to choose from. Lick Khalith’s pussy while lying on the ground or make her fuck you on a table instead of her being the one fucked. You can also have passionate sex with a dragon girl futa missionary style, or enjoy some simple scissoring action.

There are still plenty of adult scenes being worked on and with each major content update featuring new ones, I am one step closer to bringing you a Carnal Instinct Sex Demonstration video showcasing all of them in a nice neat package, similar to Fallen Doll: Operation Lovecraft.

A highly requested addition to many has been seeing humans in the world of Carnal Instinct. After all, despite already having a human torso as a cosmetic option, tied to the world’s lore, the game is still heavily tailored towards the furry community with no actual humans to be seen, until now that is!

Humans are finally making their way to Sabu and those who enjoy Carnal Instinct via Patreon are already getting a head start having fun playing as a human character. Those playing on Steam will have to wait for a small while until the next major content update rolls out, but when it does, you can expect more gameplay demonstration here at Eroguysensei.

In addition to playing as a female human, you will also be able to play as a male character. It is said that you will get to enjoy male on female, male on futa, and even male on male action. Soon everyone will be able to enjoy Carnal Instinct no matter their sexual preference.

For an open world game, Carnal Instinct used to feel a bit restricted due to its invisible walls surrounding water. Before, you had to walk around a massive lake to reach the other side which would take several minutes what now only takes a few seconds. This may seem like a small change but it is a big quality of life improvement, one that I personally am happy to see in the game sooner rather than later.

Even though there is nothing much to do in the actual water right now, the new swimming mechanic will allow Team Carnal Instinct to surprise us in future updates. Perhaps an underwater temple? Treasure chests that are hidden at the bottom of the lake? Who knows, we will wait and see.

While on the subject of quality of life improvements, fast travel feature has also been added. You can now discover and unlock fast travel points which to use to traverse the world of Sabu. No longer will you need to run endlessly to reach your destination if you have already been to the location once, all you have to do is just find a fast travel point and choose a desired destination.

A new story quest has been added to the Steam version of Carnal Instinct in which you get to further your progress on the quest named ‘Milk & Honey’. After defeating the Inquisitor of Bast near the Statue of Anubis, you get to now have a long conversation with the sexy naked Crocodile, Nepthys, who sets you up for a new quest called ‘Diamond in the Rough’.

A newly expanded area in the southwest part of the world holds a dungeon inside for you to explore. This one is a bit longer than the previous dungeon and it even holds a giant mini-boss at the end of it, undefeatable by normal physical means. To slay the Titanic Guardian, you first must seek the help of the Void, found near the dungeon behind a statue puzzle. She will grant you her form in exchange for getting to have her way with you.

These are the five major updates to the game but there are more tiny updates left unmentioned, like for example, the day/night cycle and a need to use a torch in dark places to light the way. New skins for both cats and draconic can now be found in the world. Some new enemies have also been added, but since these are not actually new enemy designs but just reskins of old ones, there is no need to highlight them any more than just a mention.

You can read the entire content update along with added items, bug fixes, and changes, all available on Steam.

If you wish to stay ahead of the Steam version and get your hands on all the latest content updates sooner rather than later, all you need to do is become a patron on Team Carnal Instinct Patreon to get access to the latest test build.

As more major content becomes available, you can be sure to learn about it here at Eroguysesnei! If there is anything specific you wish to learn about Carnal Instinct, feel free to drop a comment down below and I will answer to the best of my abilities.