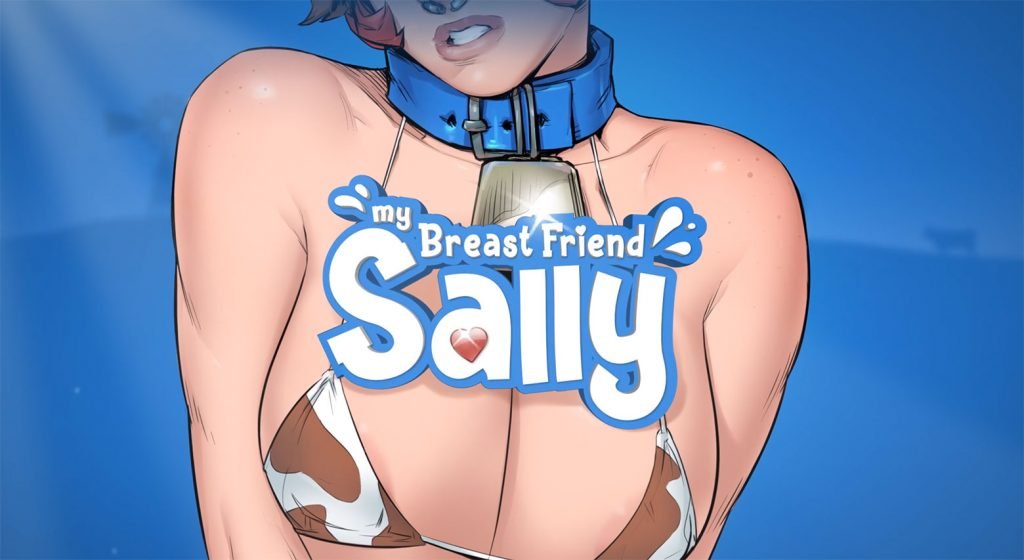 Created by Lewd Mewd and published by Kupaa Studios and Critical Bliss on Steam, My Breast Friend Sally came available on the 30th of September, 2020.

Centered in the life of a busty cow-girl named Sally, you are introduced to this sexy half-naked character from the very start, and it is here where you soon will be able to spread your wings and explore the farm using a simple map and your mouse to click at points of interest to visit.

Every location in the map follows a simple visual novel cutscene. simply just click on an interactable icon and that is all the gameplay required from you.

My Breast Friend Sally should not be confused for a point-and-click adventure despite the game trying to tell you so because that is not what it is. It is more about observing than gameplay. While there is a single minigame that is a match-cards puzzle, it mostly works to remind the player about the lack of content in the game rather than provide entertainment.

My Breast Friend Sally offers a gallery that saves every lewd scene you have encountered but also hidden items that you might have found.

Sally can be dressed in a few different sexy outfits and backgrounds using the dress-up gallery. This is a much-appreciated feature for something that is a short-lived experience, but I personally hardly found any reason to stick around and go look for missing items after my first playthrough.

To put it all in a more detailed perspective, the game offers 25+ illustrated scenes, CG Gallery, Extras and secrets, and the Dress-up Gallery. All that can be experienced within 30 minutes or so.

There is a small cast of characters, each paired with a partner to have their own unique sex scenes together, but unfortunately, beyond this, the game features no actual story to be told where the characters could flourish and breathe life into the game.

These characters go about their day jumping from one sex scene to another. Expecting any kind of character development or interesting events or conflict should be thrown out of the window right about now if you have not done so already…

Sally is a busty human-cow hybrid, with a sweet voice of a stereotypical backwoods farm girl who spends her days dreaming about having her way with a young man named Jimmy – who has come to the farm to help Edmund with his chores.

A typical scenario of a boy growing into a man through proof of hard physical labor and sex with a woman is quite a nice idea, though short-lived. The idea of seeing Jimmy grow into a man by proving his worth and growing interest in women around him is something we never get to see nor experience as the game rushes Sally into the arms of Jimmy just so that we can get to the sex scene.

All the other characters follow this same pattern of urgency to get naked and it is clear that My Breast Friend Sally does not try to tell any kind of actual story, which is quite disappointing seeing how much potential it could have had…

Fiona is a professional caretaker of the farm’s horses and a woman who clearly has spent plenty of time doing hard labor, judging by her strong figure. She has a certain lust for humanoid horses and does not hesitate to show it if this can score her a ticket to pound town with a beefy horse cock.

Dash is a horse-human hybrid, one of the three stallions found on the farm. Arrogant and self-centered, Dash has little reason to care what people think of his personality, thanks to his stunning physique.

If you have a fetish for horse cocks, My Breast Friend Sally may be a short-lived experience in this area but it does take home the prize thanks to its amazing character designs and sex scenes!

Edmund is the farm’s owner, an old man who takes care of all the animals on the farm. Having got Jimmy to do some of the chores, he can now spend more time together with his beloved cat. Despite being a character without a face, Edmund still manages to make an interesting addition to the story, if only there was a story to tell…

My Breast Friend Sally has gathered mixed opinions on Steam among its players. One major highlight of a problem is the game’s short length, but while it can be balanced by its cheap price point, it still feels a tad bit too much.

Even more so, there is not much effort put into hiding secret items for the gallery as they are way too easy to find, almost to a point that calling them secrets feels like being generous…

Also, with only one minigame available, it does not make much sense. Even though something as simple as a card memory minigame can come out as a lazy idea, strangely enough, it can still be somewhat entertaining with a worthy reward waiting at the end. However, when it is the only attraction on the farm, it feels more like the developers did not know what they were doing and just forced something to bandage the short length of the game.

All this is a shame because My Breast Friend Sally has excellent voice-acting and a beautiful art style that could have carried it far had the developer built an actual game around this title.

Had there been an actual story, I would be singing another tone, but sadly the game mainly focuses on just jumping from one sex scene to another so what you get is not an exciting story of farm life told through interesting characters, but mere pornographic content with no substance. This of course is not a crime but the problem lies within My Breast Friend Sally’s way of marketing itself as something that it offers very little of.

Like said before, when you accept the fact that My Breast Friend Sally is nothing more than a simple short visual novel with few sex scenes to enjoy, that is when you will find the game worth the money you spend on it. It is not an awful game, much of what it offers is high-quality when it comes to the sex scenes, but as for the point-and-click adventure and story, one might want to look for such content elsewhere.

For the friends of point-and-click visual novel adventures, I would recommend your attention to be shifted towards Space Rescue: Code Pink, What a Legend, and Aurelia. While these are games still in development and takes a completely different theme, they both succeed in where My Breast Friend Sally failed and a lot more!