Survive through the zombie apocalypse with a small selection of weapons to fend off the lustful living dead. Meet NPCs along the road and find out who you can trust and who will leave you for the corpses. Take upon dangerous quests, search zombie-infested houses for useful items, avoid infection, make every shot count, and perhaps there is a better tomorrow waiting at the end…

The world of Overgrown Genesis is guided by an interesting story filled with intriguing characters, each with their own troubles which you can help with. As you travel alone fighting zombies and mutated creatures, there are NPCs along the way for you to meet and receive quests from.

Each encounter can be an exciting one because you never know who to trust. The story of Overgrown is always keeping its players on their toes, and just like the gameplay, it tries to keep you guessing where things are heading without being too obvious about it.

Gather resources and discover new tools and weapons to make your journey through the zombie apocalypse a less stressful one. Ammo is a luxury that comes rarely compared to the number of enemies you will be facing. Each shot counts and a bullet spared can prove lifesaving later down the line.

When defeated, you are hurled back to the title screen. Fortunately, progress can be saved whenever and wherever pleased so dying does not feel too punishing, and thus experimenting with different approaches to new challenges for the best result is one way to move forward for those seeking a less brutal survival experience.

“The deforestation of the Amazon had changed more than anyone anticipated. Out from the ecological devastation came grotesque, plant-like monsters, spreading an affliction across the globe.​

You play as a former mechanical engineer- who until now, has been able to find shelter in what remains of human civilization. After a job gone wrong, you find yourself on the wrong side of the barricades and must fight your way back to safety.

Little do you know, getting home will soon be the least of your worries.”

Play as Juno, a young woman in search of a new place to call home after having run out of supplies to survive the zombie apocalypse. Along the journey, you meet all sorts of NPCs, some of whom can help and some who may turn on you at a moment’s notice. After several encounters, it can become hard to trust people, and that is where Overgrown manages to build a thrilling story worth following.

You will be making a journey through dangerous zombie-infested lands for your own reasons and survival, but also find safe haven in which you must earn your keep like everyone else to be a productive part of a crumbling society trying to make a comeback. For a mediocre-looking pixel RPG, Overgrown has what it takes to keep its audience invested in the story.

Fighting through zombie-infested streets and houses can often find you killed if not careful. Ammunition comes rare and melee weapons can break in use, so running past enemies is encouraged though not always easy.

Surviving the grim world of Overgrown requires making every shot count and taking advantage of many opportunities to search the environment for ammunition and valuable resources that are found in short supply. However, each turn off the beaten path is a risk that does not guarantee a reward at the end, so knowing when to take a risk becomes a strong element that mixes well with the survival aspect of the game.

The world of Overgrown is crafted to offer small semi-open areas free to explore for resources, as well as tight corridor-like spaces where danger lurks in every corner. Some random buildings can be entered and there are even opportunities to explore off the beaten path to discover side quests, lewd traps, and other interesting events.

With many locations to visit, there is plenty of variety in level design to appreciate. From bloody ruined residential areas to silent green parks, dark sewers, and military bases, the scenery never stays the same for too long before introducing a new area to explore.

To learn about Dystopian’s new game projects and support them, visit the developer’s Patreon. As of right now, Dystopian Project is developing a lewd dark fantasy pixel RPG: Claire’s Quest: GOLD, and it is set to release in late 2021. 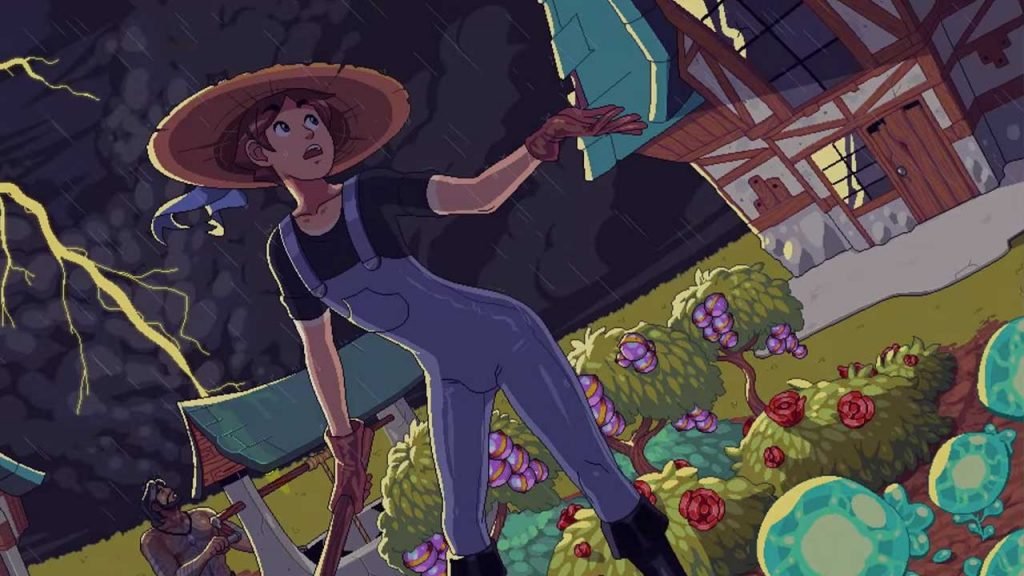