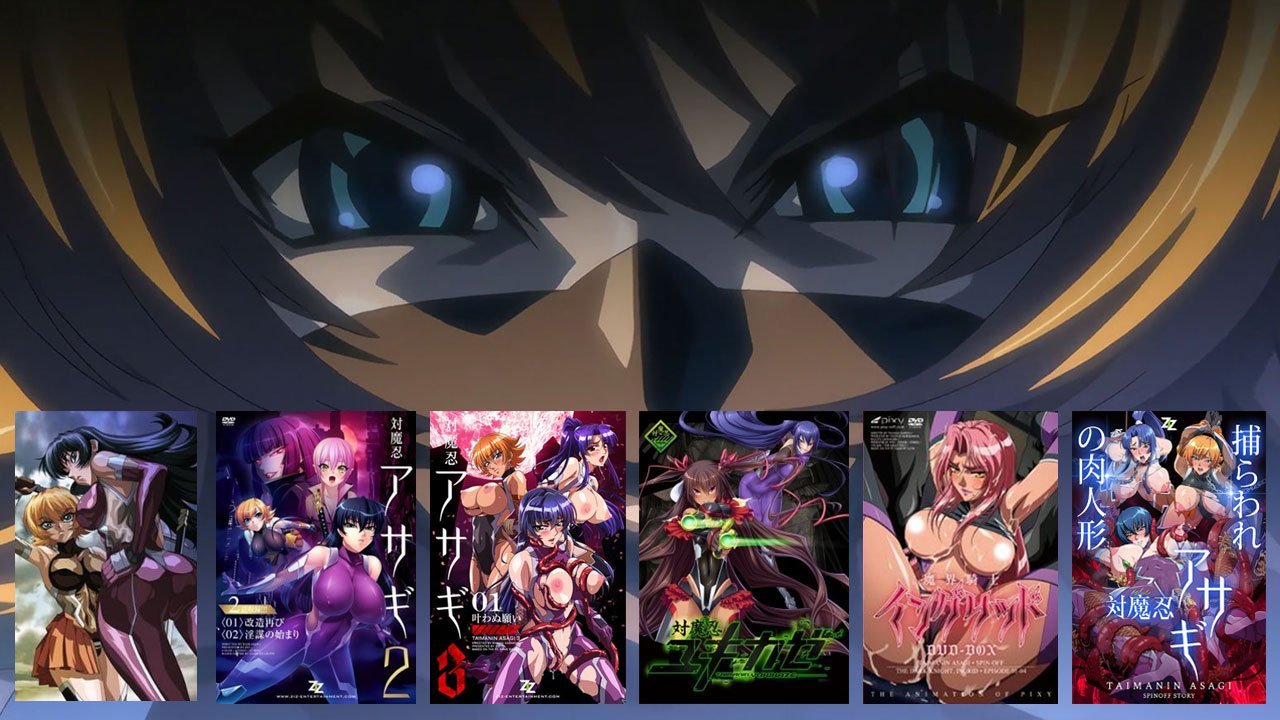 The face of Asagi has grown to be a symbol of sexy ninjas in tight skimpy outfits, though one could argue that La Blue Girl was doing that way before Asagi back in 1992. No matter, it is quite clear that Asagi won the title of ‘ultimate sexy ninja’ for both popularity, recognition, and having stayed relevant for all these years.

Taimanin Asagi is such a vast franchise today that a newcomer can have a somewhat hard time to figure out where to start with all of its spinoffs and games after having watched the main show. Having released its first episode back in 2007, the Taimanin series thrives strong even to this day with its ongoing 2020 release; Taimanin Asagi Toraware no Niku Ningyou.

Taimanin Asagi truly is a franchise one can get behind, fall in love with, and become a true fan of. Once done so, there are plenty of products made out of Taimanin like; figurines, dakimakura pillows, posters, and other items of this nature to collect which add more to the fan service. When starting your journey of becoming a fan, what better place to start than watching the very first episode!

Taimanin Asagi tells a story of a girl named Asagi Igawa, who is a member of an Anti-Demon Ninja organization known as Taimanin, funded by the Japanese government with an aim to fight against criminal organizations and companies created by an unholy alliance between men and demons.

Taimanins are secret ninja agents who work in the shadows, fighting demons and carrying out dangerous missions which require supernatural abilities that Taimanins are known for, thanks to their bloodline of demonbred children, in other words, Cambions.

Oboro, Asagi’s Archnemesis, who was believed to be dead by Asagi’s very blade has made a return and is after revenge for what our protagonist did to her. Oboro is about to deliver pain in the form of pleasure and show that she is not one to be fucked with. By targeting Asagi’s loved ones, she will set a trap to capture her and introduce Asagi to the infamous Chaos Arena.

The Chaos Arena acts as a familiar stage to most of the series’ lewd scenes, later known as Demon’s Arena. It is a place where Tokyo’s shadow and criminal society gathers to enjoy illegal death battles which often result in sexual punishment of the defeated one.

All this is Orchestrated by a shadow figure known as Edwin Black, a vampire who is introduced as the series’ true antagonist but never seems to get a fair chance to act as one due to lack of proper screen time. To know more about him, one has to look beyond the main series into the world of Taimanin visual novels and spinoffs.

Compared to Edwin, Oboro enjoys the luxury of screen time plenty over him, and by doing so, she ends up stealing the spotlight as the show’s main villain, especially when considering she holds a special hatred towards Asagi and the two share a bloody past together.

For such a big story like Taimanin Asagi, it is only natural that not all information is given to the viewer in the first episode, the world building is part of the series’ charm after all. As the story continues, the series will introduce some new characters from both sides of good and evil who will each become well-known in the ever-growing universe of Taimanin. If you enjoy sexy ninjas, there is no better place to enjoy them than here!

Something to note about the animation is how Taimanin Asagi tends to use flashing lights and constant blur effects in many of its scenes. Never before have I felt like wanting to turn away from the screen as much as I did when trying to enjoy this show. Flashing lights have been pretty common place in old Animes before studios began to give concern towards epileptics, and while Taimanin definitely is not the only one guilty of this practice, it still relies on it a lot more than what is considered in good taste.

Despite these minor hiccups, overall, Taimanin Asagi delivers an excellent adult show to enjoy which only becomes more lewd with each new episode. Watching the journey of Asagi turning from an honorable ninja to Oboro’s personal sex slave is something worth to return to whenever having that special mood for some sexy ninjas, orcs, and tentacles!

The main series consists of 3 Taiman Asagi seasons, with first one having 4 episodes, and second and third one with only 2 episodes. Though there are only 8 episodes in the main series, the Taimanin universe expands itself further through spinoffs like Taimanin Yukikaze and Hell Knight Ingrid.

In Hell Knight, just to give an example, we get to see the world from the perspective of a new character working under Edwin Black. These spinoffs work great to continue the Taimanin universe and they are just the kind of itch one needs after finishing the main show that ends on a mild cliffhanger.

Video games and visual novels also help expand the universe while bringing new characters and adding more to the events before and after the main series. Despite being a happy owner of the Premium collection box of 6 Taimanin Asagi visual novels, I must hold back and focus on the films.

Lastly, we have yet another spinoff story; Taimanin Asagi Toraware no Niku Ningyou. It is an ongoing series which has just one episode available at the moment. Despite having familiar characters from the main show like Asagi and her sister Sakura, as well as Oboro, this one claims to be a spinoff even though its setting is not alien to where Taimanin Asagi 3 left off. For anyone who watched the entire show and continued from here, this feels pretty much like a sequel at first, but as one dwells deeper into the episode, there are things that do break this misconception.

The writing is decent and the story has strong foundation because the world works within its own rules and limits and the show never appears to break them. For a series based on Tokyo with demons living among humans and the government running a secret Taimanin program, it all seems to fit together just fine even though much of this really is not shown to the audience, just mostly explained…

The bigger picture Taimanin tries to paint with its world and lore is not really found in the main series, but it builds a base for everything else that happens outside of it. If you are willing to dive deeper into Taimanin universe by watching the spinoffs and enjoying some of the visual novels, I think there is a world worth to explore here.