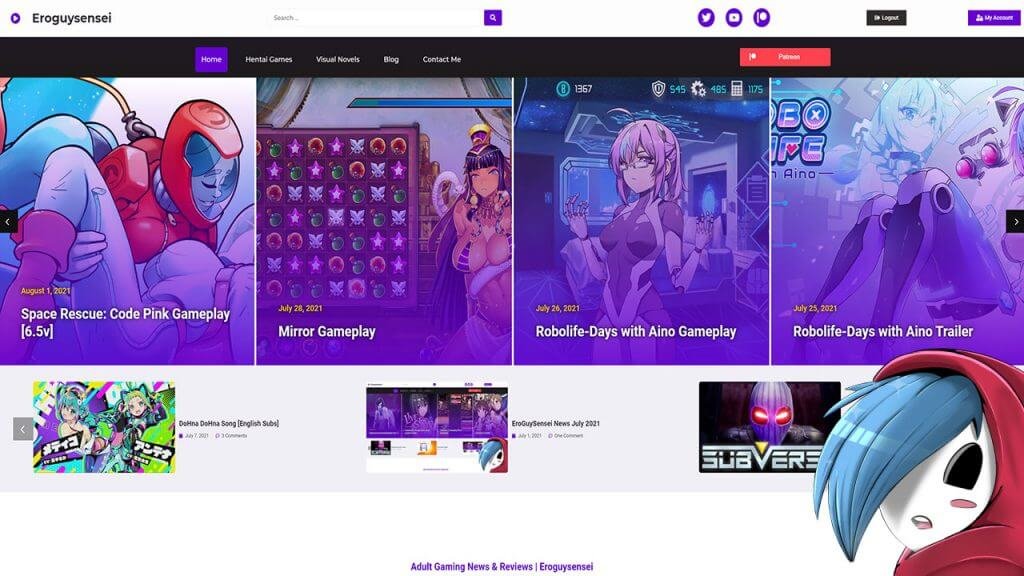 The month of July was one of the more challenging months of this year while working on EroGuySensei. Finland experienced a blistering heatwave lasting for a couple of weeks during which time my shower was not providing cold water and I had no A/C to cool me off. Needless to say, I was melting away, cooked up inside my own house, trying to create content for the website.

If that was not bad enough, a game I played in hopes to bring to your attention suddenly decided to majorly bug on me in mid-way to a point where it became unplayable, so that was time lost for nothing. Instead of highlighting what could have been a decent game to recommend to some, I say, at least for now, try to stay away from The Shadow of Yidhra. I will be writing a blog post about it at some point when I get around it.

Before getting to the content for the month of August, let’s first check out what I was able to bring you last month (July):

Technically, Space Rescue Code Pink Gameplay 6.5v was released just today, but I was actually fighting with technical issues trying to render and upload it since yesterday, otherwise, it would have made it to July, but oh well, it is not really that big of a deal in the end. More importantly, I hope you find the new gameplay footage enjoyable and informative.

Now, what was a big deal was Fallen Doll: Operation Lovecraft Sex Demonstration 0.34v. This video containing over 3 hours of pure sex scenes from multiple angles featuring all the available adult content from the latest premium build, was a big undertaking in midst of all my work. To speed up the process, I could have just filmed each scene from one angle and call it a day, but it was very important to me that the video would be an experience rather than just informative of what the game holds inside — after all, the developers have done a fantastic job with all the animations and it is my pleasure to show it to you all.

On another note, I have been requested to remake the Game Over Daisy video, this time providing an endless mode. To this tiny project, I will dedicate one afternoon somewhere this month. To my knowledge, there really is nothing new to go over about OnModel3D as the developer has not been working on a new game nor added features on Game Over Daisy, so do not be surprised to not see anything more than just the endless mode showing a longer play session with Daisy.

For the month of August, I am looking for a window to get to bring new content of Castle in The Clouds and The Witch’s Endless Corridor. In addition to these two games, there is a chance I might add some other old games as well if there is time.

Having promised to bring you Evenicle 2 content of the Japanese full version, I am currently replaying and speeding through the over 13-hour demo and beyond in hopes to get to start uploading new never-before-seen content for the western audience.

There is no telling when Alicesoft will be finished with their localization of Evenicle 2, and for as long as this continues to be the case, I will work towards completing the Japanese version while providing content about it every now and then, up until I am able to review the game in full. For how long this may take, it is impossible for me to say due to my hectic lifestyle and work schedule, but since this is one of the longer projects I am tackling along with DoHna DoHna, there really is no rush.

Just like I mentioned last month, I am still unable to say when you can expect more Evenicle 2 content. Since July’s heatwave really did a number on my ability to work on EroGuySensei, this has slowed my progress in the case of Evenicle 2.

For the month of August, I will slowly continue to work on Evenicle 2 content in the background while providing news and highlights of other adult games. If there is anything specific you wish to see about Evenicle 2, feel free to comment down below to let me know.

Taking back my previous statement from last month, I was unable to deliver on my promise of new content after the translated DoHna DoHna song, to which I apologize. Just like my progress of Evenicle 2 suffered from the weeks of a continued heatwave, so did DoHna DoHna, not to anyone’s surprise I may add. While it is disappointing and downright embarrassing failing on my words, the only excuse I can offer is that DoHna DoHna is not a project I get to work on full-time nor is it a priority here at EroGuySensei. It is only natural that things do not always progress at the pace which I anticipate.

All I can do right now is just push myself and continue with the translation in hopes that I will have a new segment ready for the next month. Though things may look dire, there really is no reason to worry. Overall, the project is doing just fine and the first chapter is not far from being complete, but I am still holding back from providing a release date for the upload until I am absolutely certain that I am able to deliver on it without ending up disappointing everyone just like I have done just now with my last month’s promise.

To avoid any further embarrassments on my part since the future is an unknown one and you never know if next time it will be fire raining from the sky, I will hold back from making any new promises on DoHna DoHna’s case and simply focus on my translation work until the project is finished. After all, there really is no benefit in making promises for something like this other than keeping up the hype which may end up blowing on my face in the end. Why I feel a constant need to keep my audience satisfied even at the risk of disappointing them is beyond me, but I hope I can take this as a lesson and learn from it.

I hope the DoHna DoHna song in English has been enough to satisfy you for the month of July. With that said, here’s to another month working on the DoHna DoHna English translation, hopefully with more hours dedicated towards it to catch up lost time.

This month’s news update was a short one, but that is the way I like it. Stretching things with too much information can overwhelm the reader, but the true reason for the short post is that things are slowly normalizing for me with not many new announcements to make, and that is just fine. I am hoping to get EroGuySensei on a clear and steady upload schedule on which my audience can rely. But to do so I must first be able to deliver content monthly without too many elements affecting my work so that I can trust in my own schedule. I am still working on far too many different projects simultaneously and am hoping to get each project finished sooner rather than later so that there is nothing more left than just the usual adult gaming news coverage.

For the month of August, I will continue to bring new adult games to your attention, as well as more content about old ones already featured here at EroGuySensei. Thanks to my Patreon supporters, the number of games I am able to work on for the month of August and September is going to be plentiful. You can already see the first Patreon supporter appreciation label on Fallen Doll: Operation Lovecraft Sex Demonstration 0.34v video description, and these same labels will now continue to be placed on each and every game that has been purchased with your help so you know where your money is going and so that newcomers to the site can learn what kind of impact their support can provide to my work.

Naturally, not all games will be to your liking, but always feel free to let me know what type of adult games you would like me to cover so that I can keep my eye on them while searching for new exciting games to cover in the future. With everything said and done, I will see you in September!

EroGuySensei is preparing for the month of Halloween! Read about Evenicle 2 and DoHna DoHna project updates, as well as Koikatsu Sunshine…
Read more
Home
Videos
Blog